The Evergreen Lodge was originally developed to facilitate building of the O’Shaughnessy Dam in Hetch Hetchy Valley. Though no definitive records exist, spoken history indicates that the Evergreen was founded by a man who worked on the Hetch Hetchy Railroad, which was principally built to haul people and materials to and from the Hetch Hetchy dam construction site. In the early years, the Evergreen was a post office, restaurant and general store. Lore has it that moonshine was brewed in the basement of the lodge during Prohibition. In the late 1920’s, the Evergreen was purchased by Roy & Stelle Thornton, who built the Main Lodge that we know today. In the mid-1930’s, the lodge was sold to Dan & Angie Rove ro of San Francisco. Rovero had previously operated the Groveland Hotel and took over the Evergreen to capitalize on the boom during the construction operation that raised the height of the Hetch Hetchy Dam in the late 1930’s. Business thrived during this period as local workers took advantage of three illegal slot machines.

During this time, the Rovero’s added a Standard Oil gas station in front of the lodge. While the pumps are long since gone, the original gas station still stands today.

In 1952, the Evergreen was sold to Jack & Katherine Garrison, who were friends with and had worked for the Roveros. Under the Garrisons’ ownership, the lodge offered a grocery store, liquor sales, soda fountain, dining room, bar, gasoline, auto repair services and bait & tackle sales, although some cabins still had no running water. One weekend a month in summers, the Garrisons would hire a four-person orchestra to play on the patio, where the General Store now stands.

In 1975, the Evergreen was purchased by John Bargmann, a retired Berkeley fireman. John revitalized the business and added 8 cabins to the 10 that still remained. For the next 25 years, Bargmann’s life revolved around the Evergreen. He met his wife, Kay, at the lodge, married her at Camp Mather’s Birch Lake and raised his kids here too.

We acquired the lodge in late 2001 and since then have re-envisioned, expanded and revitalized the Evergreen, adding 72 cabins, rec center, game room, swimming pool, main plaza and much more. We have since established our innovative, self-funded Youth Employment Program, a unique social impact element of the lodge.

We are proud and excited that the Evergreen and its new sister property, Rush Creek Lodge, now offer all-around lodging and guest experiences unparalleled in the Yosemite area. We hope everyone who stays with us has an amazing visit.

Lodge staff and guests have compiled a list of 100 Ways to Celebrate Our 100th that includes a mountain of activities for explorers of all ages to enjoy throughout the year. See how many you can tackle! Here are a few to get you started, and this QR code takes you to the full list! If you can’t conquer them all during your stay with us, you can always come back again!

Fun at the Lodge #83 Pose for a photo with our historic life-sized cut-outs
#86 Show off your limited edition 100th anniversary keepsake bag – free with your stay!
#87 Share your Happy Birthday message on social media
#88 Get a limited edition 100th anniversary hat or t-shirt in our general store
#90 Post a card to a friend in our historic mailbox, made from railroad ties used on the Hetch Hetchy Railroad and a wood-burning stove chamber that originally warmed the tavern #29 Order a “Warren Waffle” in honor of waffle-loving 1921 U.S. President Warren G. Harding
#35 Get the secret password and join one of our speakeasy nights
#32 Enjoy a box of See’s Candy from our store – also celebrating their 100th this year!

Out and about in yosemite 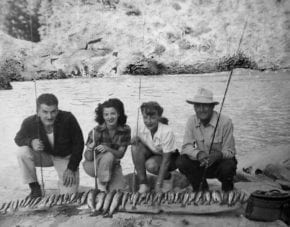 #46 Spot the rainbow in the canyon below the O’Shaughnessy Dam
#44 Enjoy a fun-filled, scenic Bike & Hike to Granite Gorge In 1916, the original Carl Inn was built by Dan and Donna Carlon on the banks of the South Fork of the Tuolumne River. At the time, this was the route of the main road into Yosemite, and the Carl  Inn capitalized on the new found freedom of auto travel. Unfortunately, the location was no match for Mother Nature, with various historic accounts of rebuilding following fire, flood and snow over the years. The Carl Inn was torn down for good in 1940. The hike to Carlon Falls along the South Fork of the Tuolumne River is a local’s favorite. Please visit our Front Desk or Recreation Desk for directions and more details. The dam was constructed to provide water and electricity to San Francisco and the Bay Area. The project was completed in 1923 despite vehement opposition from John Muir, a Yosemite Pioneer and founder of the Sierra Club. Muir once stated about the Hetch Hetchy valley that, “no holier temple has ever been consecrated by the heart of man.” Often called the sister of Yosemite Valley, Hetch Hetchy is not to be missed. Whether you are an engineering buff who will marvel at the feat of the O’Shaughnessy Dam or a naturalist exploring the trail to Wapama Falls, we invite you to visit this breathtaking beauty right in our back yard. This historic railroad tied into the larger Hetch Hetchy Railroad, which helped haul people and goods for the construction of the O’Shaughnessy Dam. Simultaneously, Peach Growers operated a mill that made packing crate material and used the rail line for transport to California Central Valley Fruit Farmers. One of the old Peach Growers rails is actually used to hold up the Evergreen’s mailbox! This historic trail is flat but not fancy, so be ready to step over a few logs. It’s a half-mile trail that parallels Evergreen Road, ending at the old the Peach Growers property. Visit our Recreation Desk for all the details. Now a family summer camp run by the San Francisco Recreation and Parks Department, Camp Mather was originally constructed to house the workers building the O’Shaughnessy Dam. The lake at Camp Mather, now known as Birch Lake, was once a millpond for the logs hauled on the Hetch Hetchy railroad and used as forms for the
new dam.

In the 40’s, gas at the Evergreen service station sold for a whopping 35 cents per gallon, which was double the price charged in town. That was not nearly as risqué as several illegal slot machines and a bar open until 2AM. Rumor has it these slot machines, hidden behind a false bar wall, were once robbed, but the police were not called as the penalties for gambling were greater than the cost of the heist! Some staff have confessed to finding nickels and dimes from fallen slot machine winnings in the cracks of the Tavern floorboards.

Make yourself at home in the Tavern and look for clues from the past, like burn marks on the floor where a wood- burning stove once stood. This old stove was removed years ago and found new life as the lodge mailbox across the road from the old gas station. Wander through the framed photos of Evergreen’s rich history. Fortunately, much of the Tavern landmarks live to tell colorful tales. It’s up to you to make friends who can fill you in on the secrets… A variation on the Roaring 20’s era cocktail The Last Word, a gin-based concoction originally served at the Detroit Athletic Club.

More recently, Evergreen Bar Manager Brandon Smith was intrigued by the modern substitution of Mezcal Tequila for the traditional ‘bathtub gin’ base.  During Prohibition, Americans frequently crossed the southern border into Tijuana where over 100 bars freely sold Mezcal. We imagine that Mezcal was a welcome change from bathtub gin back then, leading to the invention of The Smoking Bandit, an uncommon combination of strong flavors that somehow ended up tasting delicious together.

The official drink of the Kentucky Derby since 1938.

“Juleps” have been around for hundreds of years, originally as sweet drinks that were used to administer medicine.  Today we know the Mint Julep as a refreshing Spring treat that has been the official drink of the Kentucky Derby since 1938, where they still serve about 120,000 Mint Juleps each year.

If you’d like to skip the alcohol, replace the bourbon with club soda or another favorite sparkling water, and enjoy your mocktail!

Ingredients
~ 2 oz bourbon ~
~ 1⁄4 oz simple syrup ~
~ 8 mint leaves ~
~ crushed ice ~
Preparation:
Muddle mint leaves and simple syrup in the bottom of a julep cup, then add bourbon and pack with ice. Swirl contents in cup until it gets frosty, then add more ice. Garnish with a sprig of mint and enjoy!

You can try these delicious beverages for yourself at The Evergreen Tavern! 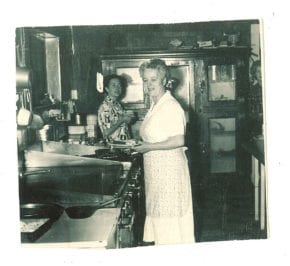 Can you imagine a world where no one ever heard of quinoa and kale salads? During the era of speakeasies, flappers and mobsters, celery stuffed with pimento cheese was the height of sophistication and everyone thought flapjacks were the bee’s knees.

A marshmallow roasting fad was spreading throughout summer resort towns across America. Newspapers popularized the marshmallow roasts as an “excellent medium for flirtation” because of the shared experience.  Candy makers soon followed with Mallomars and Moonpies, cousins to the campfire S’mores that officially debuted in a 1927 Girl Scout guidebook. We’re keeping the tradition alive for you each night here at the lodge!

In the spirit of our centennial, you’ll see some fun additions to our menus this year. We’re doing our own take on 1920’s classics like Waldorf Salad, Chicken à la King and Hangtown Fry. Of course, breakfast will feature fancy waffles in honor of 1921 waffle-loving U.S. President Warren G. Harding.

Ready for the latest editions of the Gazette?

Sign up to receive future editions of the Gazette via email.